This huge Hockney retrospective at the Tate Britain is probably one of the most amazing exhibitions I have ever had the privilege to see. I have always been a fan of Hockney sand this for many reasons. He is my generation, he was a sixties swinger, he was never afraid of criticism, he was open, when, to be openly gay was a crime and he brought understandable art to the masses. But I was totally ignorant of his early work from his college days and just after and also of his recent iPad drawings.

The exhibition is presented chronologically starting with his work in college and just after. There is something poignant about this work. He is showing his homosexuality but at the same time presenting it in a comic way. The two figures in “Cleaning Teeth” are typical of this period. He painted in many different styles like his hero Picasso. But he was still constrained by the times.

In 1964 he visited Los Angeles for the first time. California seemed to liberate him. He became part of the Bohemian set. His paintings took on a new life. The “swimming pool” series are among his best known. He studied water and its movement intensely. He was satirising the abstract movement in these paintings. His male fiends and partners are represented in this pictures. It seems to have been a very happy time for him. He was living the good life but he continued to be intensely productive.

At the end of the sixties he moved to acrylics. These gave the vibrancy he wanted to show. Acrylic also demanded more accuracy as they could not be painted over. He created paintings of his friends relaxing either in his house or theirs. The likenesses are remarkable almost  like photographs except they are unmistakably Hockney. He was later to introduce photography into his work and complained that photography is too ‘flat’. He is working to improve this by creating 3D images superimposing several photographs. One such is presented in this exhibition. It is the card players.

His painting is shown on the wall of other card players. The lines between photography and painting are truly blurred here. This is what I dream of being able to do.

He also worked with Polaroid images creating a montage of dozens of images. Such inspiration.

He returned to the UK for a number of years. He stayed about eight years appearing to be surprised that he had stayed so long. He returned after the death of his 23 year old assistant from poisoning. While in Bridlington, UK,  he painted the countryside. After the brilliant sunshine of California he loved the seasons back in England. Other than the charcoals just after his young friend’s death, his paintings were very vibrant. But he returned to California soon after.

Back in the UK in 2006 he began his series of the Wolds. He painted outside, for the first time, on huge canvases. Again demonstrating that he wants to create different paintings in different ways. In 2010 he began making multiscreen videos. This are mesmerising. We, all four of us, stood in front of the huge wall watching these. We disagreed afterwards about which screens were moving and which were static. Again Hockney was challenging us taking us on a journey into the image. It was magic.

Just when you think the man cannot create another original painting he moves to his iPad drawings. These are created on screens as you watch. It is mind altering…. The finished works, although they are only ‘doodles’ are brilliant.

This man is a genius. Long may he live to create every move challenging work.

The full title of this exhibition is:

Viewing this exhibition with my two very young grandchildren proved a bit of a challenge… However while sitting outside The exhibition hall I realised the blinds on the window had images of the artists. I loved these. 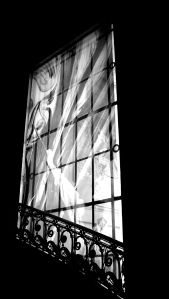 Frida Kahlo and Diego Rivera are probably the best known Mexican artists. Part of their fame came from reports of their stormy relationship, part from Kahlo’s work based on her very disabled body, partly from their political activities, her relationship with Trotsky and partly from their evident talent. I have always been fascinated by their story. 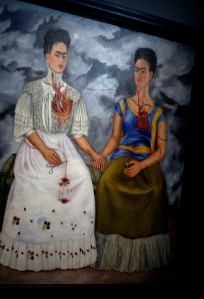 To see the two Frida’s for real was a great thrill for me. It is even more impressive than I had anticipated. 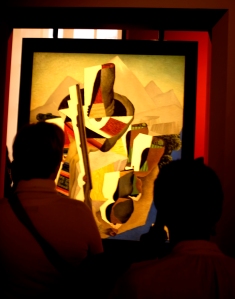 Although Rivera was familiar with the French Avant Garde he chose to continue working on images of his homeland. Together with Orozco and Siqueiros Rivera created images of the proletariat in Mexico. He believed these people were destined to greatness once the socialist revolution took place.

Here are some of the other artists in the exhibition about whom I knew very little. One such artist who was in fact, I learned, a graphic artist, was called Francesco Diaz de Leon.

Siqueros, another unknown to me,  was very active politically and he favoured murals for his art. He felt easel work was private. He was influenced by the Avant Garde movement. This image was mounted on a type of metal and almost bounced off the wall.

I could not spend any time in the section of the female artists of Mexico. I was also unable to stop long enough to take pictures of the many paintings which seemed to jump off the walls with their vitality. But I felt so privileged to have had the opportunity to accompany by beloved grandchildren to this exhibition. Maybe they will remember…

The Charlotten Palace on Nyhaven in Copenhagen is a very beautiful building in a famously pretty area of Copenhagen. For this exhibition the side of the building, which stretches along the port, was covered in jute sacks by Ibrahim Mahama. He

is an artist born and working with Ghana. His installation works using Jute sacks (reappropriated material he has purchased from markets, which were first cocoa sacks and then coal sacks) are the result of his investigation of the conditions of supply and demand in African markets. Torn, patched, stamped with PRODUCT OF GHANA, and written over with owners’ names, the bags are variously marred, marked, and transformed. These installations are displayed in Ghanaian markets as well as galleries, thus defying the artifacts’ intrinsic value system. Ibrahim uses the coal sacks as a device to explore process, material, value, and meaning. He creates an artistic vision out of a commonplace material, repurposing them and exhibiting them in the very marketplaces from which they came. (1)

The result is extraordinary. The weather during my visit was grey and damp which added to the brooding nature of the sacking covered building. I photographed the building from the outside, close-up and from the inside out.

A close up view of the sacks 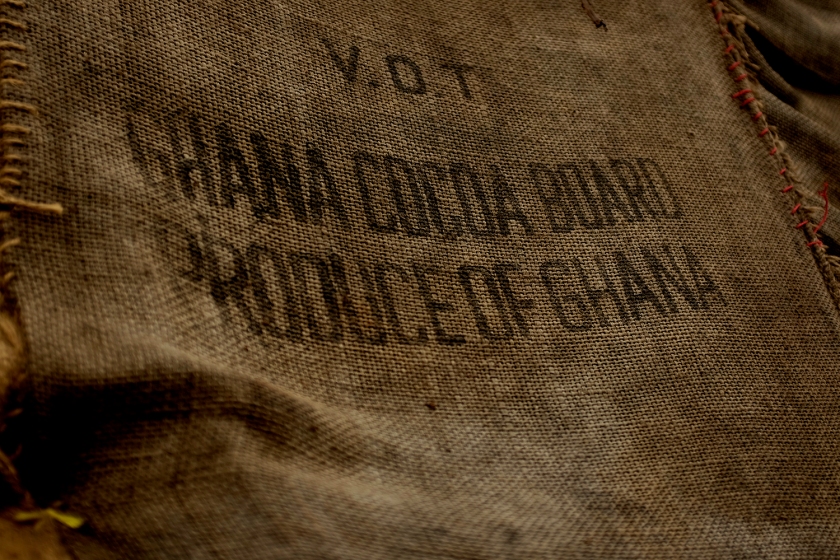 There were a number of other artists exhibiting in the Charlottenborg. Tita Salina and Irwan Ahmet are Indonesian. They create work mostly in cities with participation of those around them. They had a number of video installations at Charlottenborg. One concerned Salina’s protest against creating another island in the harbour area of Jakarta which would have jeprodised the livlihoods of the local fishermen. Salina collected rubbish from the harbour and created an island with this which was pushed out into the sea. She was filmed from above. I took snapshots from the screen to try to give some idea of the project. 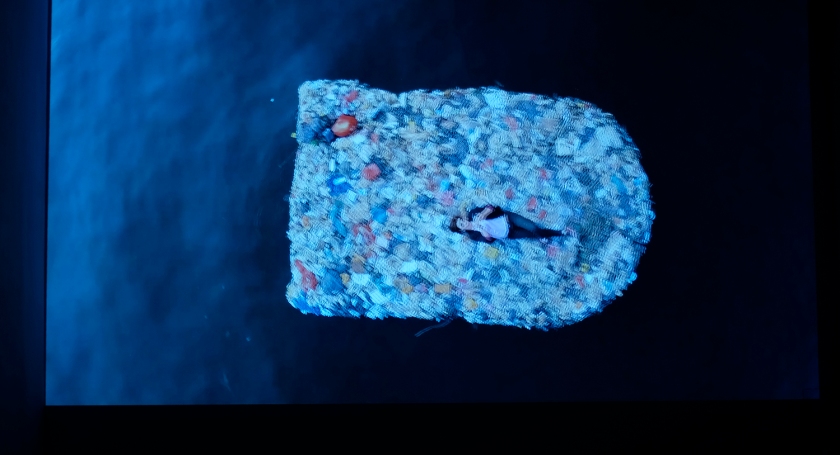 This is a video of an interview with the artists on the occasion of the Singapore Biennial.

The Scottish National Galley is showing a very interesting impressionists exhibition. The predominant painter on exhibition is Daubingy. His huge influence on the young impressionists, that were just emerging towards the middle of his career, is beautifully demonstrated.I had not known about this influence before visiting this exhibition. Daubigny was exhibiting already in the Salon when Monet was just born.

Daubigny supported the work of the young impressionists and tried to have it accepted by the Salon. There are a number of Monet’s works on display. Daubigny’s work was much darker, in the style of the time.

Daubingy became very successful and well off. He commissioned a river boat which he had fitted out as a floating studio. The exhibition has a model of this boat. Monet visited Daubingy and they worked on the boat on the river. Working outside like this was not the norm at the time. They both used the river as a foreground and both showed river reflections. Monet’s work was much lighter than Daubigny.

Monet was so impressed with Daubigny’s outdoor river studio that he bought a similar boat and converted it to a studio.

Van Gogh was also deeply influenced by Daubingy. There are two sets of three paintings, one by each of the three painters. The different style of each is so clearly demonstrated. Daubingy, although still producing much heavier work than either Monet or Van Gogh, was being influenced by the younger painters. Monet’s work is so light and ethereal while Van Gogh’s is unmistakably his own strong brush strokes.

The exhibition is hung based on a timeline so the cross influences are very evident. The information is clearly presented. This is one of the best impressionists exhibitions I have ever seen.